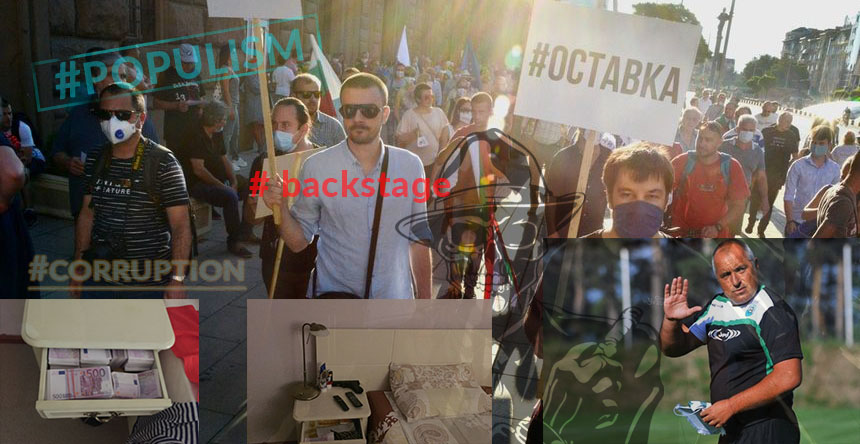 Boyko Borisov boldly untied the purse, distributed “fats” from the fiscal reserve, reduced VAT. But isn’t the Prime Minister late with these actions?  What is it: genuine concern or pure populism? Will the new reduced VAT rates, interest-free loans and one-time supplements for pensioners prevail over the feeling of a mafia backstage in Bulgaria ?! Backstage and spreading corruption, which has long been ruining everything good in this country ?! Will populism succeed in suppressing the energy of the protest?

Enough is Enough – shouted the Sovereign and daily marches through the streets of Sofia and the country demanding “Resignation”!

The unprecedented blockades of important road arteries across the country do not stop. In Sofia, the blockade in front of Sofia University remains.

The bus of the mothers from “The System Kills Us” was not allowed to “Orlov (Eagle) Bridge”, where the protesters block the crossroads every day. This created tension between the mothers and the police.

The international road E-79 to Greece, at the exit of Blagoevgrad in the direction of Kulata, was also blocked.

A tent camp appeared near the Stara Zagora-Haskovo road. He appeared after protesters tried to block the Trakia highway on Friday night, but were stopped by police.

There are many examples of declared civil disobedience, and they continue multiplying…

These days in Bulgaria, VAT rates are falling like the Dow Jones index at the peak of the Covid-19 crisis. The unprecedented VAT changes are voted expeditiously and disciplined by the ruling majority in Parliament, as part of various measures to support the businesses most affected by the coronavirus in our country.

The first to fall were the VATs on restaurants, hotels, campsites, caravans, children’s goods, etc.

In early June, the VAT rate fell from 20 to 9% for baby goods, baby food, restaurants and books. VAT is cheaper for camping sites and caravans. The proposal was enshrined in the VAT Act and submitted for a vote by the ruling coalition. The amendments were adopted with 150 votes in favor, 2 against and 1 abstention. With this, the final VAT for restaurants, hotels, books, baby food and goods fell to 9%! Accommodation (including holiday) such as hotels, guest houses, etc., as well as the rental of places for caravans or camping, are subject to 9% VAT.

Not bad, don’t get us wrong. But again, it seemed as if there were “God’s chosen ones” and the rest… get better as they can..

We are already in early August. The government has proposed new socio-economic measures for those affected by the coronavirus. Boyko Borisov is ready to dig deep. The five “fuses” in the government that burned down (the five replaced ministers) did not work and did not ease the tension. The protests not only do not subside, but become even more heated…

What do the new measures mean in numbers?

About BGN 1.1 billion will be distributed for social measures and about BGN 730 million for economic ones. The coalition council, headed by the “father”, gave a briefing to announce the “good news”. The money will come from the “fat” in the fiscal reserve. At this stage the loan will not be drawn…

How (again) did the “pancake” turn?

Only a month ago, the government did not allow to talk about reducing the VAT rate for alcohol of wine and beer. However, Boyko Borisov set a new course, and the change from 20 to 9% of the rate is already in Parliament. This is another example of how Boyko Borisov changed his mind in a very short period of time. The following is the VAT of the occasional transport, for which the same VAT reduction is provided.

From 1 August, staff costs will increase to 30%. This concerns administration bodies struggling to control the pandemic. People working night and overtime will receive higher salaries. An additional BGN 92 billion from the budget is provided for them. Various structures of the Ministry of Interior, the Ministry of Health, the National Health Insurance Fund, the National Social Security Institute and others will be supported.

The icing on the cake is the one-time supplement to the pensions for 3 months in a row at BGN 50 per pensioner. Budget expenditure: BGN 318 million.

The medical establishments will receive an additional BGN 17.3 million for the treatment of patients with infectious diseases, TB and non-specific lung diseases. Medical institutions in hard-to-reach areas will also receive subsidies.

The unemployed have not been overlooked either. From October 1, the minimum amount of compensation will be increased from BGN 9 to BGN 12. Budget expenditure: BGN 12 million. The term for payment of the minimum compensation is increased to 3 months. For which the treasury will spend another 4 million.

The budgets of almost all ministries are increasing. The Ministry of Regional Development and Public Works is the most favored, as might be expected. BGN 355 million are allocated for Borisov’s favorite projects related to road infrastructure. For comparison, the Ministry of Interior will receive an additional only 3 million, and the Ministry of Culture – 15 million.

A difficult year for tourism is looming. The industry, which was among the top earners in the budget, now needs serious help. But it is unlikely that the issuance of vouchers worth BGN 210 per cap – to promote domestic tourism, will stop the mass bankruptcies in the industry. The measure is aimed at directly related to the treatment and prevention of the spread of the coronavirus.

Sleep easy, Bulgarians! There is democracy in Bulgaria! This was stated by Prime Minister Boyko Borisov, answering a question about the protests. However, the feeling is of a countdown started…

2020-08-04
Previous Post: Negative online reviews: how to sue for defamation?
Next Post: Bulgarian citizenship and residence permit in 2021