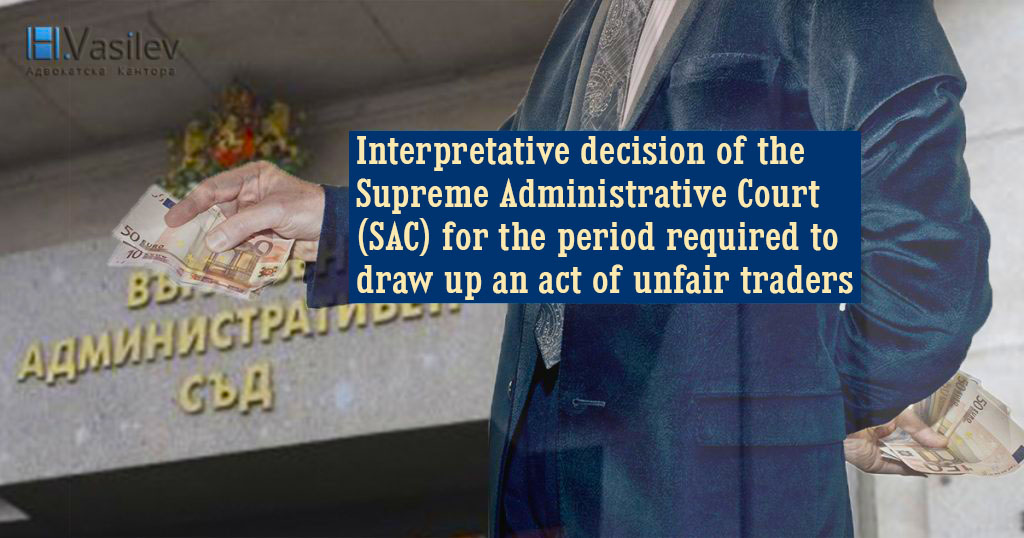 A long-awaited interpretative decision of the Supreme Administrative Court (SAC) has been issued. According to the decision, if you are a manager of a company, a member of the management body or an appointed procurator and you have failed to publish data on the tax status of the company, which would harm the state due to inability to collect taxes and insurances – you will have to repay debts . The SAC also adopted a deadline for drawing up the relevant act of the disloyal trader.

The interpretative decision of the SAC under the Tax and Social Security Procedure Code (TSPC) for case №7 / 2019.

“The responsibility under Art. 19, para. 1 and 2 of the Tax-Insurance Procedure Code of the third obligor shall include the established interest obligation of the principal debtor ”.

The changes made are under Art. 19, para. 1 and 2. According to them, the responsibility of the manager (procurator) can be sought not only for data concealment, but also for transactions damaging the property of the company, due to which it cannot pay its obligations to the state. It is about:

– transactions with payments in kind or cash owned by the obligor, which are for the purpose of hidden distribution of profit (dividends);

– transactions related to expropriation of property. Including the company (enterprise) of the obligated person – if the expropriation took place at a significantly reduced market price;

– performed actions that have led to an additional encumbrance of the property of the legal entity in securing foreign debt. Then the redemption was performed in favor of the third party.

In addition to the manager (procurator), majority partners or shareholders will also be held liable for transactions damaging the company’s property. In case the transactions have taken place with their decision and consent. However, if they were not present, did not vote or voted against during the voting, they will not be held responsible.

“With a special opinion”

According to the SAC, personal property liability for obligations of a company or enterprise (legal entity) is a case with the stamp “extraordinary”. This is a subsidiary liability. Therefore, the judges of the SAC, in their interpretative decision, emphasized that the enforcement is aimed, first, at the property of the company or enterprise (legal entity). The liability of the third party will be decided by an Audit Act.

According to the interpretative decision adopted by the SAC, the offending managers (procurators, proxies) of companies and enterprises will pay the debts together with the interest. It was the part with the interest that turned out to be the “apple of discord” that separated the judges from the Supreme Administrative Court. The decision was accepted, but ten of the judges signed it with a dissenting opinion.

What is the deadline for drawing up an act?

If you have participated in unfair commercial practices, the term for drawing up an act for establishing an administrative violation under the Consumer Protection Act starts immediately after the offender is found (Article 34, paragraph 1 of the Administrative Violations and Penalties Act – AVPA). .

The decision of the Supreme Administrative Court is on interpretative case №3 / 2019.

The interpretative decision of the SAC includes acts issued by the chairman of the CPC (Consumer Protection Commission) for:

The SAC rejected the Ombudsman’s requests

The 2 questions raised by the Ombudsman of the Republic of Bulgaria related to the provisions of the Law on Foreigners were rejected. Case №1 / 2019 was terminated by the SAC.

For tax consultations, problems related to audits by the National Revenue Agency (NRA), etc. – you can contact us HERE.